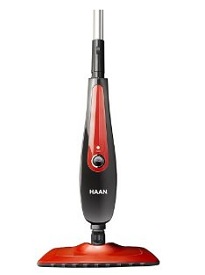 The SI-40 Agile steam mop by HAAN uses only steam to sanitize and clean your floors. It heats up quickly and comes with a generously sized water reservoir allowing you to clean large areas without needing to refill as often.

In addition to being used on a variety of hard surface flooring, this machine has the added bonus of being able to be used on carpet and upholstery.

Read on to see how that works, or better yet, see it in action in the video review below. 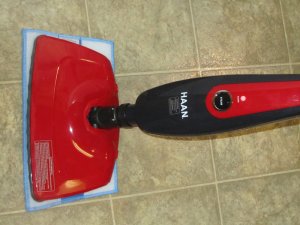 The HAAN Agile is an electric steam mop that easily glides over hard floors and is easy to maneuver in tight corners.

The large, detachable water tank allowed us to clean large areas of flooring without having to constantly stop to refill, lasting twenty to twenty-five minutes.

The mop quickly heated the water up within twenty seconds, which allowed for almost immediate use. Since the steam comes out at 212, degrees the mop not only cleans but it sanitizes as well.

The HAAN SI-40 did a great job of cleaning the vinyl flooring in our house, getting dried and sticky spots up with little effort.

It did take a little longer to clean scuff marks and after some use, the Ultra-micro-fiber pad ceased being effective at picking up the debris that was left on the floor our broom has left behind from a pre-testing sweep. 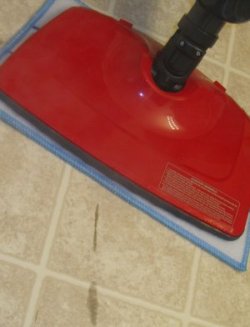 No one seems to be exempt from spilling or dropping things on their floor. Once dried, these spills can be a challenge to clean up.

One of the things that we loved about this machine is that no matter how dry or sticky a spot was on our floor, the steam mop was able to loosen the debris and wipe it away.

When cleaning dried debris, you will need to leave the HAAN SI-40 Agile steam mop over the top of the debris for a few seconds at a time, being careful not to leave it too long as it can damage your floor if left in one spot for too long.

We found a good method for cleaning was to hold it over the trouble area for no longer than eight seconds, then wipe it back and forth a few times before holding it back over the spot again.

This can be repeated until the spot is clean. If this method is not sufficient for removing the stain, HAAN recommends pre-treating it with detergent.

Much like cleaning dried debris, the HAAN Agile will easily remove scuff marks from the floor. The process of wiping these away is the same as that used for dried or sticky messes, but can take more scrubbing.

Simply leave the steam mop over the scuff marks for a few seconds at a time wiping it back and forth between treatments. 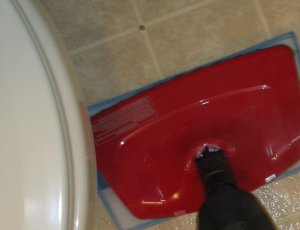 One of our favorite features of the HAAN SI-40 Agile steam mop is the low profile of the mop head.

At just over an inch high, we had no trouble cleaning under the lips on our kitchen and bathroom cabinets.

The pivoting head turned easily allowing us to follow the contours of our walls. The cleaning pad is stitched with thick thread around the edges making it stiff.

Because the cleaning pad is larger than the base of the machine, you have to rely on the edge of the pad to clean against vertical surfaces.

This can be a disadvantage when you need to put some elbow grease into your cleaning, but overall we felt it did a good job on edges.

The HAAN Agile has a special attachment called the carpet glide for use on carpets, rugs and upholstery among others.

HAAN explains that this attachment has the ability to freshen, deodorize and sanitize as well as being capable of killing dust mites and other allergens.

We tried the carpet glide attached to the steam mop on an old coffee spill on our carpet. We let the mop sit on the stain for a few seconds, then moved it back and forth over the stain several times.

After that, we removed the carpet glide and attached the Ultra-micro-fiber pad, moving the SI-40 back and forth across the carpet.

The stain did not appear to be any less noticeable than before we tested the steam mop on it. While it did not clean the old stain, the Instruction Manual states that it is most effective in cleaning up recent, wet spills and stains.

Also, when the Ultra-micro-fiber pad was on the steam mop, we found it difficult to move along the carpet.

The mop moved smoothly when pulling it back, but it seemed to get hung up when pushing forward. 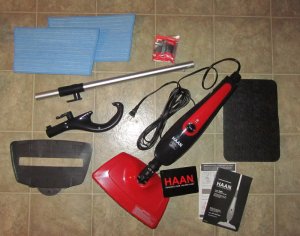 After that, we filled the water tank up, plugged the steam mop in, hit the steam power switch and within 20 seconds we saw steam.

When we first turned on the machine, we noticed a loud vibration sound. The HAAN manual explains that this common occurrence is caused by air that builds up in the water pump line when the unit is turned off.

As the machine heats up, it pushes the air out of the line emitting a vibrating sound. 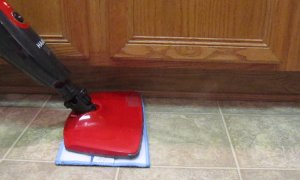 The HAAN SI-40 Agile is, for the most part, easy to clean with. The steam mop moved smoothly on vinyl, but had a little more trouble with carpet.

When cleaning the carpet, the Agile moved smoothly when pulling it back, but would stop and feel like it would get stuck when pushing it away.

In order to get it moving, we had to push hard on the handle, which would free it up but caused it to jump ahead.

This made for an unpleasant and somewhat frustrating experience.

As described earlier, the low profile design of the head on this steam mop makes getting in, under and around tight spaces a cinch.

SI-40 also has a swiveling head, which allowed us to easily switch directions while mopping.

It also helped us while we were cleaning tight spots since the handle is able to be lowered nearly parallel to the floor.

The power cord is conveniently stored on a cord wrap located at the top and base of the handle. Both the top and bottom cord hooks flip down, allowing you to easily lift the cord off.

The top cord hook also has an additional hook that the cord is placed in during use in order to keep the cord out of the way.

At nineteen and a half feet long, we felt the cord’s length could be limiting for someone with a larger area to clean.

In addition to storing the HAAN SI-40 steam mop and resting mat, you will need a place to store your pads, carpet glide and lime and scale remover packets.

Because the power cord can be securely wrapped on the back of the mop, this machine is pretty tide to slip into a closet or corner of your utility room.

It is very important to always empty the water tank when you are done using the machine.

While the steam is a powerful cleaning tool and will leave your home fresh by sanitizing and eliminating odors, sometimes you just want that extra touch of a fragrance to personalize your home.

This scented liquid comes in such fragrances as Fresh Apple

and is used by placing a few drops on the micro-fiber pad prior to attaching it to the steam mop for use.

While we didn’t get to test the steam scents, we found the option very desirable. 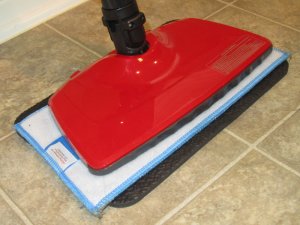 The HAAN SI-40 Agile steam mop comes with two ultra-microfiber pads. HAAN defines this pads as “a textile fiber that is thinner and more absorbent than a micro-fiber (1.0dtex) pad typically used with steam mops.

Specifically, to be defined as an ultra–microfiber, it should be less than 0.2dtex.

The Ultra-Microfiber pad by HAAN Corporation is made of .17dtex ultra-microfibers.”

These pads should be completely dry before using. As you clean, you will notice that the pad begins to become saturated and will start to repel water.

When this begins to occur, it doesn’t clean as well and will need to be switched out with the spare pad to maintain optimum performance.

We found that after some use, the pad would no longer pick up debris from the floor, but push it around.

We ended up having to go back and use a paper towel to clean up the spots where this debris accumulated.

Air-drying is recommend, but they can be tossed into the dryer.

We felt the option of being able to throw these pads in with our laundry was very convenient and helped to streamline our house work.

After each use, HAAN recommends emptying the water tank and taking the ultra-microfiber pad off the floor sanitizer when it has cooled for five minutes.

The machine comes with 12 packets of Fresh Rinse Lime and Scale Remover. These packets are used to help eliminate calcium that can build up during regular use.

HAAN indicates in the instruction manual that cleaning the SI-40 every month with these packets can help the machine clean as effectively as possible.

Value For Your Money 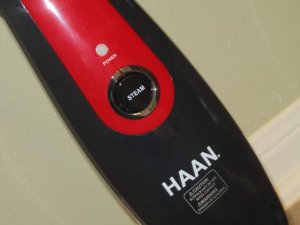 While someone might think twice about putting down dough in the triple digits for a cleaning tool, it is important to realize that this device cleans more than just your tile, linoleum and vinyl flooring.

Because the Agile can be used for cleaning, sanitizing and freshening carpets and upholstery as well, it is a multipurpose tool offering more value than if it was just for hard surface flooring.

We liked it! We appreciated the extra cleaning features and ability to sanitize so many surfaces in our home. We would recommend the Haan SI-40 Agile steam mop for someone who won’t be limited by the cord length. Someone with allergies would also benefit from using this tool in their home.