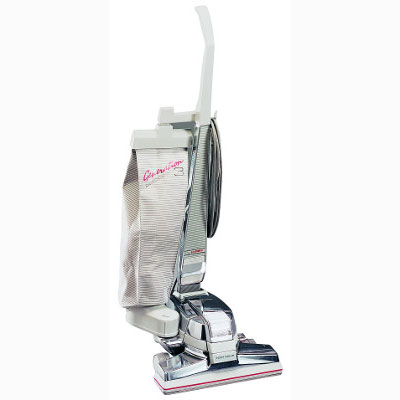 My parents, and by extension me since I had the vacuuming chores, have owned one of these beasts since 1991 and it has been rock solid in terms of performance and durability until just a couple years ago when it started to show signs of its age. They replaced it with a Dirt Devil, not aware of the Kirby G3’s lifetime rebuild warranty.

The G3 is the Humvee of vacuum cleaners. You could take this thing to a war zone and vacuum up bullet casings with it. Suction is powerful and consistent along the entire length of the powerhead. It has a neat feature where it blows adjacent small objects like lego pieces or earrings to the side of the powerhead if you run it near them.

The techdrive really works although it can be a little too aggressive when vacuuming tight areas with short strokes. Although a cool feature, if you can’t maneuvre this behemoth without the tech drive on, you probably shouldn’t own it anyways since you’ll have trouble lugging it between floors.

Unlike many other vacuum cleaners, switching to the hose attachment does not seem to decrease the suction power by much. The attachments are many and well designed. Cleaning hardwood floors was very effective with the bristle head (it is a bit narrow for floor cleaning however) and it is particularly good at cleaning car interiors because the extreme suction through the samurai sword attachment really grabs the bits and piece of dirt in the hard to reach areas inside your car, like between and underneath seats and around the floor mats.

There are three main drawbacks to the G3: it’s loud, like leafblower loud; it’s heavy, although my mom and I lugged it up and down three floors for years without much problem, and it fills up the bags quickly (which are pretty expensive). I guess this is a consequence of it’s immense sucking power so it’s a double-edged sword.

After 15 years of service little things started to break down. Belts broke, headlight and LED light fritzed out, the spring on handle wore out, the straight pipe extension piece cracked, powerhead bearings wore down and the tech drive stopped working — all the usual wear and tear that comes from almost 20 years of almost daily use. The motor is the one thing that is still running strong though.

I don’t remember how much my parents originally paid for it, but I know it was a heck of a lot more expensive than a regular department store vacuum cleaner. But seeing as how my parents are dirtaphobes, the peace of mind from bringing a cannon to a pistol fight was worth it.

Bottom line: If Arnold was a housekeeper, this would be his vacuum of choice.