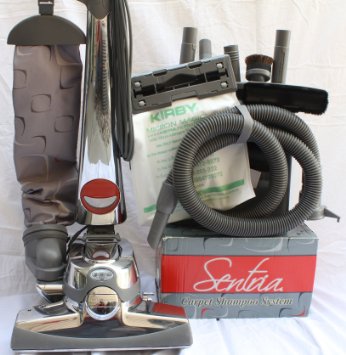 Oh where do I even begin? Well lets see. I had purchused a kirby sentria vacume about 2 weeks ago and let me assure you that it has been nothing but an absolute nightmare between the actual product and its customer service, which they claim they thrive on. But where most businesses say the customer is always right this business says the total opposite.

About a year ago i had my first visit by the kirby company (a family member recommened me) the rep who came out was a very strange man. He was eating the soap from the rug shampooer and continuously kept trying to shake my hand over and over again telling me that if i bought a vacume from him he would win a vacation to florida. I didn’t quite see how that would benefit me in anyway and besides the fact he was in my house for four hours after i repeatedly told him i wasn’t interested in the product.

About 2 weeks ago i received a phone call from the kirby company asking if they could come out for another visit to clean my couch and carpets. I told them i wasn’t interested in buying their product but they kept pushing and said that by law they were only allowed to stay for 60- 90 minutes at the most and i would get a free carpet cleaning so i figured what the hell its christmas time and i had family coming over why not clean it up. When the rep showed up around 4:30 he was very nice and one of the stores managers so i wont say anything bad about that but as he continued with his demo it dragged into dinner time so i began to cook and offered him some food out of kindness and he also helped himself to about 5 beers.

Finally around 8:30 after i felt i was pressured into buying the product he finally left. It’s almost like they dont leave until you agree to buy one. I had used the vac about 2 days later and was very disappointed in how it worked. The smell was horrible, the hose kept falling off and getting clogged, it was extremely hard to push and the belt kept falling off. I called the company and told them these problems and said all i wanted was my money back ( i had 3 days to make a return) i was told that they thrive on their costumer service and wanted me to be happy with their product so they would bring out a brand new vac because the one i was sold was a demo used by numerous reps at other peoples houses and had scratches on it (why was i sold a used vac for $1,000)? and that i would receive and additional 3 days to my return if i was unhappy.

The next day the same rep came out to my home and rebelted the vac and showed me that it worked. He told me if i wasn’t happy with it again to call and i would be taken care of. Well when i tried to use it the next day to shampoo my carpets the whole thing fell apart and blew foam all over and wouldn’t pick any of it up. I tried to reconnect the belt for about 45 mins and watched the demo video but had no luck. This all happened on christmas eve about an hour before guests came over.

So all of my rugs and rooms were soaked and filled with foam. I lost it at that point and was fed up with this product and all of its broken promises that i called the seller again and they basically told me that there was nothing they could do about it but bring me another one, which at this point that was the last thing i wanted. I said that i was given an additional 3 days for my return but the manager then claimed that was never said but indeed it was. I called the main 1-800 telephone # and spoke to a women and she basically told me the same thing that i wasent getting my money back and there was nothing they could do about it and i could try to do whatever i needed to do to get it back but it wouldnt happen.

I was never offered a new vac when the rep came out the second time second but they claimed it was in the car afterwards. So in conclusion i have a $1,000 kirby vacume sitting in the coner of my house unusable because every time i try to use it i have to spend hours trying to put it back together and arguing with customer service.

I would on the other hand recommend the bagless windtunnel which has never let me down and only costs about $200 and i use everyday while my hard earned money goes to waste with the kirby. I also own my own cleaning business which was an even bigger disappointment to this whole situation and i would never recommend this product to any of my customers,family ,friends or anyone in general.

Thank you, sincerely a very disappointed and upset kirby customer.