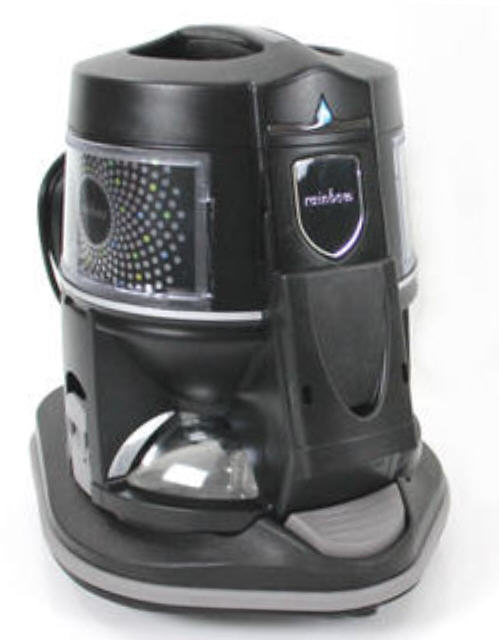 PUDDLE OF MUD AT THE END OF THE RAINBOW!

That pretty much sums it up. I have been using my Rainbow E Series vacuum cleaner for 7 years or so now.

The E series might be one of the most frustrating vac’s you can buy. The collection tank system works. It works really well; the problem is you have to empty it.

It is very tempting to dump this slurry into the toilet but I fear that after too many “dumps” that I may have long term damage. I have found using a spaghetti strainer to filter the slurry before dumping the was water a pretty good idea.

It still is a nasty job though. One thought is a 5 gallon bucket with holes in the bottom. Just dump the slurry and water into there and let the water seep into the grass. Wife not a big fan of that idea.

In general it is nice to see all the gunk in the collection bin and remember that all was in the air and carpet. The rollers this thing runs on are very nice; the wheels are large enough to get over a threshold without capsizing.

I did flip it once and that was not a pretty site. Black slurry oozing out. The power nozzle does a pretty good job of picking up, but I feel it might be a bit too thick to really get into corners. I find that I often disconnect the hose and just use that to pick up the corners.

I don’t know if anyone else has covered this point before, the handle to pick the whole unit up is padded. Really a nice touch.

This Rainbow E series vac did save my bacon one day when the kids put dish soap into the dishwasher, instead of dishwasher soap. I had bubbles all over the kitchen. I just popped on the non-powered attachments and it cleaned up nice.

Now, some annoyances. We shall start with cleaning the collection bin. I know the manual says you can’t put it in the dishwasher.

Man, it’s tempting. This thing really gets caked on gunk. Heaven forbid you leave it sit for a day or two without cleaning it out. What a mess.

The power nozzle could use a light. I can’t believe they missed this, you already have on-board power for the motor, just throw some LED’s up there.

The hand held power nozzle is a joke. It is shaped funny and you can’t get the corner of stairs well. Eventually my motor burnt out which is odd since I don’t use it that often to start with.

Do not pick up fireplace ash. You would think this would be the perfect vac but instead it is the worst. The ash has a negative charge which causes it to bounce off of the water in the collection bin and go through your motor and anywhere else.

Stay away from cat litter too. Found that one out the hard way. Once that clumps in the bin, nasty.

Some people complain that the Rainbow E series vacuum cleaner is too heavy to go up and down stairs. I have no problem, but some do.

The carpet steamer system is a royal pain. It takes quite a bit of pressure and scrubbing to clean the carpet, and the handle you are pushing on is hollow plastic. It burrows a hole into your hand and puts you in a bad mood. It works great sucking up the fluid though.

Watch out for the disappearing soap dispenser bottle. I spend nearly as long looking for this little bottle. The valves for the clean water tend to leak along the way, and I have never gotten them to seal right.

I eventually stopped using the carpet cleaner, and instead used a Koblenz carpet scrubber, then the Rainbow to suck up the water. This became too much work and now we have hardwood floors in much of the house.

I have had a few problems with this E series vac over the years besides the hand held power nozzle motor going out. The spring that holds the retaining clip for the collection bin popped out and went flying somewhere in my house.

This clip holds much of the vac together. I ended up paying $11 for another spring, I was not too happy. The retaining arms for the power cord storage have snapped off too. I can’t seem to find anyone to sell those.

In summary, I have a love hate relationship with my Rainbow. I would probably buy another one, but not at the same price.